Web pricing does not include shipping and handling costs.  Specifications and prices are subject to change without notice. 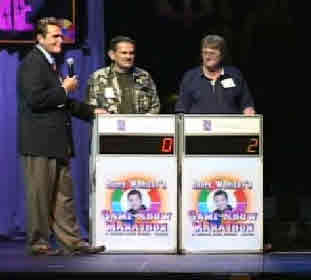 On July 23, 2006, Chuck Woolery, one of the most noted and respected television game show hosts, works his magic at the Turning Stone Casino in Verona New York. Using a  custom built DigiGames game show system, Chuck performs 2 rounds of name that tune with a live pianist.  Even with thousands in attendance shouting out the answers, the players still managed to get stumped on common everyday tunes from their own era.

Chuck Woolery has truly made his mark in the field of TV game show hosting, probably more than any other host in history. No doubt you have seen him in such television shows as:

Did you know that DigiGames’ parent company produces special built systems for local broadcast stations all over the world?